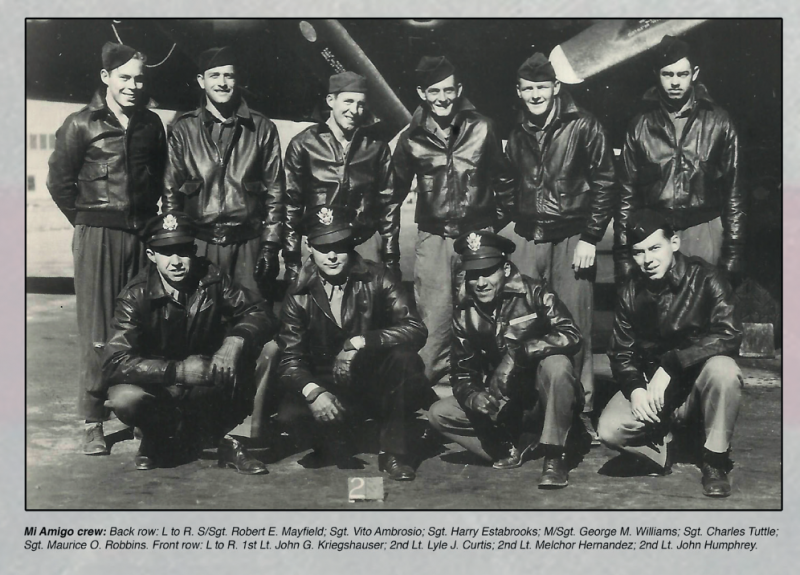 Earlier this month I read a moving thread on Twitter about an elderly man in Sheffield, England. As an eight-year-old in 1944, Tony Foulds was playing in the park with his friends when a damaged US bomber plane flew overhead.

It circled above the park, and would have been able to land safely if the children weren’t there. Instead, the pilot chose to crash into a tree-covered hill. All ten men onboard were killed.

Now, at the age of 82, Tony regularly tends the memorial for those men, which was set up in the 1970s.

It’s impossible to know what happened on that plane in the minutes before the crash—whether the pilot made the decision to avoid the children, or if all the men had time to discuss and agree together.

But whatever the case, I’m in awe of this remarkable sacrifice from such young men. They were all aged between 21 and 24. One of the gunners had a wife at home who was pregnant with their daughter. It hurts to see a photo of the group—they were real, living and breathing, but never grew any older.

Despite living with Parkinson’s disease for over two decades, Tony is determined to continue honouring the memory of these men. As Christians, I think we have a lot to learn from him.

He knows the names of all the servicemen, and says:

“I owe them my life. Their sacrifice gave me everything. I love them as much as my own children.”

Tony is not to blame, yet he still feels responsible for their deaths. He shows his gratitude through constant remembrance. When asked how often he thinks about their sacrifice, Tony replied: “Everyday, every single day.”

Until this story came out, Tony tended the memorial in obscurity. He wasn’t asking for attention. He was simply devoted to those who had saved him.

Although I don’t owe my life to ten young servicemen, I do have a remarkable Saviour. These valiant men are rightly honoured for giving their lives to save unknown children. But Jesus gave his life to save wicked rebels who hated him.

“Have this mind among yourselves, which is yours in Christ Jesus, who, though he was in the form of God, did not count equality with God a thing to be grasped, but emptied himself, by taking the form of a servant, being born in the likeness of men. And being found in human form, he humbled himself by becoming obedient to the point of death, even death on a cross.” (Philippians 2:5–8)

We don’t need to keep a physical memorial to Jesus. After all, he rose from the dead to rule as King of the world. He is gloriously alive! We rejoice, knowing that we will soon go to be with him forever.

But our hearts should constantly cherish the memory of what our Saviour has done.

May the name of Jesus be graven on all our hearts, for all our days.