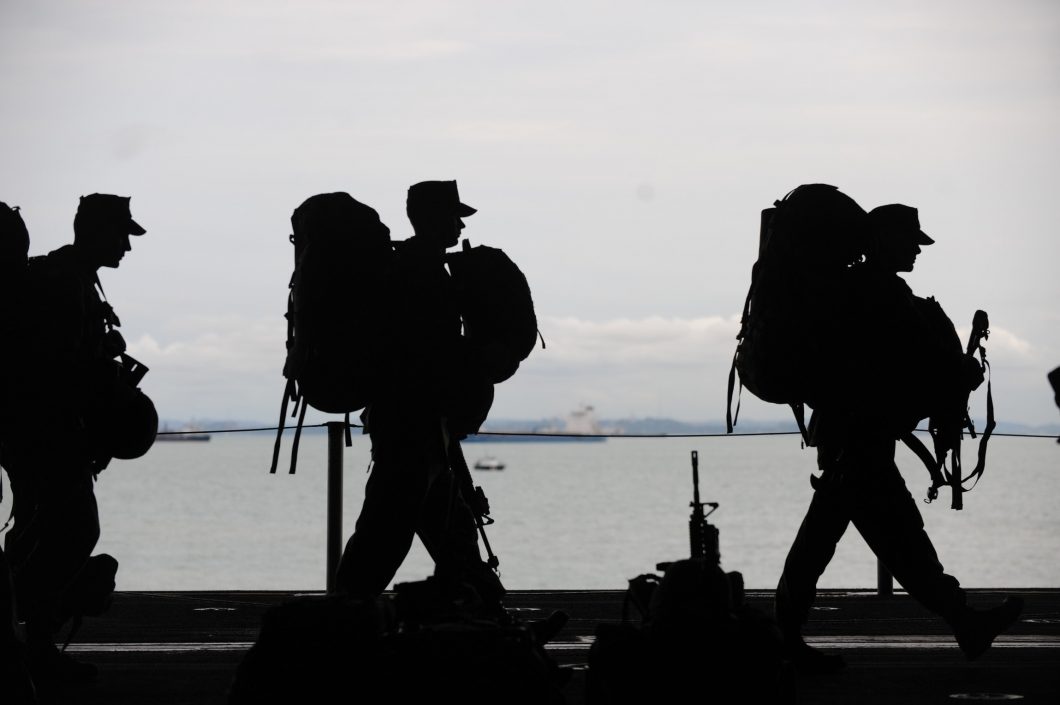 This article was originally published at The Gospel Coalition Australia on 12 March 2018.

In the past six months I’ve seen two films featuring Winston Churchill’s “We shall fight on the beaches” speech. He delivered it to the British parliament amid immense pressure to begin peace negotiations with Nazi Germany. The rousing call to stand and fight is particularly famous:

Why has this speech endured? Why is it a great cinematic climax? I think we all resonate with being part of a battle that’s bigger than ourselves. As Christians we tend to look for this cause in the world around us—the battle for marriage, or feeding the poor, or bringing justice to the oppressed. These are crucial battles, but the most important one is invisible.

Churchill gave his speech at a critical turning point in history—the threat of German invasion was real and imminent. Millions of lives and the freedom of the nation were at stake. And yet, throughout all human history we have been continually assaulted by an even greater enemy. Ephesians 6:12 tells us that we are not fighting against flesh and blood, but against the evil spiritual powers. Satan “prowls around like a roaring lion” (1 Peter 5:8), desperate to destroy our faith and blind us to the glory of God. The destruction he brings is far worse than the loss of a free Europe. Our eternal souls are on the line.

In his Institutes of the Christian Religion, John Calvin warns us of the fierce battle Satan wages against us.

“We must, then, bend our every effort to this goal: that we should not let ourselves be overwhelmed by carelessness or faintheartedness, but on the contrary, with courage rekindled stand our ground in combat. Since this military service ends only at death, let us urge ourselves to perseverance. Indeed, conscious of our weakness and ignorance, let us especially call upon God’s help, relying upon him alone in whatever we attempt, since it is he alone who can supply us with counsel and strength, courage and armor.” (Institutes, 1.14.13)

Our enemy is relentless in his schemes. The need for a wartime spirit did not end in 1945. Let’s draw out some implications about this fight from Calvin’s words.

In Churchill’s Britain it was impossible to ignore the nation was at war. Air raid wardens enforced a nightly blackout, rationing restricted the family meals, and a whole generation of young men was sent off to fight. But somehow, with a cosmic battle raging all around us, so many Christians are unaware they’re standing in a war zone. The enemy’s strategies are varied. Satan wants to convince us Jesus’ death is not enough to save us—or that we don’t even need saving, because our sin isn’t so bad. He is content to distract us to death, with television or money or success. And we let him. We are too careless with our affections.

Another danger is being so overwhelmed by the battle that you give up fighting altogether. It is crucial to acknowledge the war and take up arms. But if you think the fate of your soul hangs on your ability to counter Satan’s arguments, you’ll soon lose heart. We are prone to wander, and persistent sin can rob us of our stamina. Yet with God working in us, we can fight with growing confidence and growing strength. This is key—we will only stand if God is the one strengthening us for battle.

3. The battle will only end at death

We must not be content with a few zealous years in our youth and then check out as the pressures and distractions of life set in. Satan will not let up in the fight, so neither can we. Paul prays that the church in Colossae will “[increase] in the knowledge of God; being strengthened with all power, according to his glorious might, for all endurance and patience with joy” (Colossians 1:11). He is well acquainted with suffering but trusts in God’s power to give him perseverance through it. We need the same fortitude which comes only from prayer. The battle is lifelong—resolve now to never surrender.

What weapons do we take up in this war?

“In all circumstances take up the shield of faith, with which you can extinguish all the flaming darts of the evil one; and take the helmet of salvation, and the sword of the Spirit, which is the word of God, praying at all times in the Spirit, with all prayer and supplication.” (Ephesians 6:16–18)

God has given us the Bible so we may know the truth. Spending daily time in the Scriptures isn’t something to tick off our list to be a good Christian. It’s utterly crucial to keep ourselves from being led astray by the lies of the devil. You will never graduate beyond the gospel, never stop needing to preach it to yourself.

I think Churchill had it right. In the fight against a ruthless enemy, capitulation means death. Will you pray daily for God to enable you to resist the enemy’s assaults and go on to the end? As God’s people we must defend the truth, whatever the cost may be. We shall never surrender.